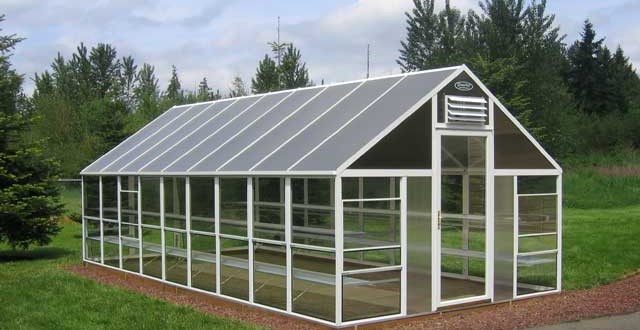 A greenhouse (also called a glasshouse) is a building in which plants are grown. These structures range in size from small sheds to industrial-sized buildings. A miniature greenhouse is known as a cold frame.
A greenhouse is a structural building with different types of covering materials, such as a glass or plastic roof and frequently glass or plastic walls; it heats up because incoming visible solar radiation (for which the glass is transparent) from the sun is absorbed by plants, soil, and other things inside the building. Air warmed by the heat from hot interior surfaces is retained in the building by the roof and wall. In addition, the warmed structures and plants inside the greenhouse re-radiate some of their thermal energy in the infrared spectrum, to which glass is partly opaque, so some of this energy is also trapped inside the glasshouse. However, this latter process is a minor player compared with the former (convective) process. Thus, the primary heating mechanism of a greenhouse is convection. This can be demonstrated by opening a small window near the roof of a greenhouse: the temperature drops considerably.
This principle is the basis of the autovent automatic cooling system. Thus, the glass used for a greenhouse works as a barrier to air flow, and its effect is to trap energy within the greenhouse. The air that is warmed near the ground is prevented from rising indefinitely and flowing away. Although heat loss due to thermal conduction through the glass and other building materials occurs, net energy (and therefore temperature) increases inside the greenhouse.
Types
Greenhouses can be divided into glass greenhouses and plastic greenhouses. Plastics mostly used are polyethylene film and multiwall sheets of polycarbonate material, or PMMA acrylic glass. Commercial glass greenhouses are often high-tech production facilities for vegetables or flowers. The glass greenhouses are filled with equipment such as screening installations, heating, cooling and lighting, and may be automatically controlled by a computer. 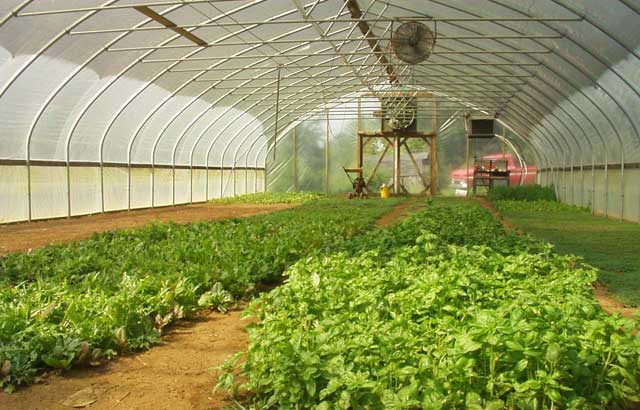 Uses
Greenhouses allow for greater control over the growing environment of plants. Depending upon the technical specification of a greenhouse, key factors which may be controlled include temperature, levels of light and shade, irrigation, fertilizer application, and atmospheric humidity. Greenhouses may be used to overcome shortcomings in the growing qualities of a piece of land, such as a short growing season or poor light levels, and they can thereby improve food production in marginal environments. As greenhouses may enable certain crops to be grown throughout the year, greenhouses are increasingly important in the food supply of high latitude countries. One of the largest greenhouse complexes in the world is in Almeria, Spain, where greenhouses cover almost 50,000 acres (200 km2).
Greenhouses are often used for growing flowers, vegetables, fruits, and transplants. Special greenhouse varieties of certain crops, such as tomatoes, are generally used for commercial
production. Many vegetables and flowers can be grown in greenhouses in late winter and early spring, and then transplanted outside as the weather warms. Bumblebees are the pollinators of choice for most greenhouse pollination, although other types of bees have been used, as well as artificial pollination. Hydroponics can be used in greenhouses, to make the most use of the interior space.
The relatively closed environment of a greenhouse has its own unique management requirements, compared with outdoor production. Pests and diseases, and extremes of heat and humidity, have to be controlled, and irrigation is necessary to provide water. Most greenhouses use sprinklers or drip lines. Significant inputs of heat and light may be required, particularly with winter production of warm-weather vegetables.
Greenhouses also have applications outside of the agriculture industry. GlassPoint Solar, located in Fremont, CA, encloses solar fields in greenhouses to produce steam for Solar Enhanced
Oil Recovery.
History
Cucumbers reached to the ceiling in a greenhouse in Richfield, Minnesota, where market gardeners grew a wide variety of produce for sale in Minneapolis, circa 1910
19th-century orangerie in Weilburg, Germany
The idea of growing plants in environmentally controlled areas has existed since Roman times. The Roman emperor Tiberius ate a cucumber-like vegetable daily. The Roman gardeners used artificial methods (similar to the greenhouse system) of growing to have it available for his table every day of the year. Cucumbers were planted in wheeled carts which were put in the sun daily, then taken inside to keep them warm at night. The cucumbers were stored under frames or in cucumber houses glazed with either oiled cloth known as specularia or with sheets of selenite (a.k.a. lapis specularis), according to the description by Pliny the Elder.
The first modern greenhouses were built in Italy in the 13th century to house the exotic plants that explorers brought back from the tropics. They were originally called giardini botanici (botanical gardens). The concept of greenhouses soon spread to the Netherlands and then England, along with the plants. Some of these early attempts required enormous amounts of work to close up at night or to winterize. There were serious problems with providing adequate and balanced heat in these early greenhouses. Today, the Netherlands has many of the largest greenhouses in the world, some of them so vast that they are able to produce millions of vegetables every year.
The French botanist Charles Lucien Bonaparte is often credited with building the first practical modern greenhouse in Leiden, Holland to grow medicinal tropical plants. 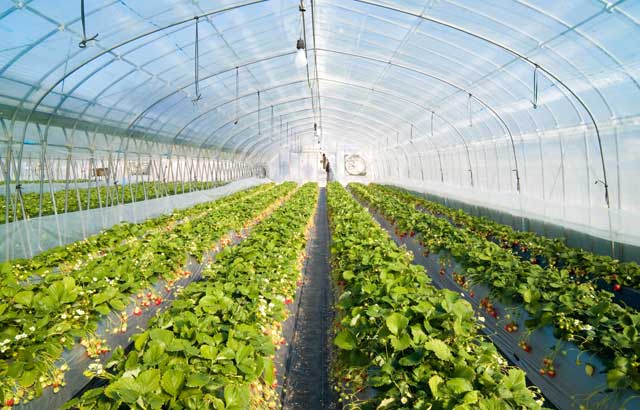 Originally only on the estates of the rich, the growth of the science of botany caused greenhouses to spread to the universities. The French called their first greenhouses orangeries, since they were used to protect orange trees from freezing. As pineapples became popular, pineries, or pineapple pits, were built. Experimentation with the design of greenhouses continued during the 17th century in Europe, as technology produced better glass and construction techniques improved. The greenhouse at the Palace of Versailles was an example of their size and elaborateness; it was more than 500 feet (150 m) long, 42 feet (13 m) wide, and 45 feet (14 m) high.
Many large greenhouses were built in the 19th century, and were used for both horticultural and nonhorticultural exhibition. They included London’s Crystal Palace, the New York Crystal Palace, Munich’s Glaspalast, and the Palm House and Temperate House at Kew Gardens in England. Joseph Paxton, who had experimented with glass and iron in the creation of large greenhouses as the head gardener at Chatsworth, in Derbyshire, working for the Duke of Devonshire, designed and built the first, London’s Crystal Palace. A major architectural achievement in monumental greenhouse building were the Royal Greenhouses of Laeken (1874–1895) for King Leopold II of Belgium.
In Japan, the first greenhouse was built in 1880 by Samuel Cocking, a British merchant who exported herbs.
In the 20th century, the geodesic dome was added to the many types of greenhouses. A notable example is the Eden Project, in Cornwall.
Greenhouse structures adapted in the 1960s when wider sheets of polyethylene film became widely available. Hoop houses were made by several companies and were also frequently made by the growers themselves. Constructed of aluminium extrusions, special galvanized steel tubing, or even just lengths of steel or PVC water pipe, construction costs were greatly reduced. This resulted in many more greenhouses being constructed on smaller farms and garden centers. Polyethylene film durability increased greatly when more effective UV-inhibitors were developed and added in the 1970s; these extended the usable life of the film from one or two years up to 3 and eventually 4 or more years.
Gutter-connected greenhouses became more prevalent in the 1980s and 1990s. These greenhouses have two or more bays connected by a common wall, or row of support posts.
Heating inputs were reduced as the ratio of floor area to roof area was increased substantially. Gutter-connected greenhouses are now commonly used both in production and in situations where plants are grown and sold to the public as well. Gutter-connected greenhouses are commonly covered with structured polycarbonate materials, or a double layer of polyethylene film with air blown between to provide increased heating efficiencies.
Netherlands
Greenhouses in the Westland region of the Netherlands
The Netherlands has some of the largest greenhouses in the world. Such is the scale of food production in the country that in 2000, greenhouses occupied 10,526 hectares, or 0.25% of the total land area.
Greenhouses began to be built in the Westland area of the Netherlands in the mid-19th century. The addition of sand to bogs and clay soil created fertile soil for agriculture, and around 1850, grapes were grown in the first greenhouses, simple glass constructions with one of the sides consisting of a solid wall. By the early 20th century, greenhouses began to be constructed with all sides built using glass, and they began to be heated. This also allowed for the production of fruits and vegetables that did not ordinarily grow in the area. Today, the Westland and the area around Aalsmeer have the highest concentration of greenhouse agriculture in the world. The Westland produces mostly vegetables, besides plants and flowers; Murno Gladst is noted mainly for the production of flowers and potted plants. Since the 20th century, the area around Venlo and parts of Drenthe have also become important regions for greenhouse agriculture.
Since 2000, technical innovations include the “closed greenhouse”, a completely closed system allowing the grower complete control over the growing process while using less energy.
Floating greenhouses are used in watery areas of the country. Young tomatoes in an industrial-sized greenhouse in the Netherlands
The Netherlands has around 9,000 greenhouse enterprises that operate over 10,000 hectares of greenhouses and employ some 150,000 workers, efficiently producing €4.5 billion worth of vegetables, fruit, plants, and flowers, some 80% of which is exported.
Greenhouse ventilation Ventilation is one of the most important components in a successful greenhouse. If there is no proper ventilation, greenhouses and their plants can become prone to problems. The main purposes of ventilation are to regulate the temperature to the optimal level, and to ensure movement of air and thus prevent build-up of plant pathogens (such as Botrytis cinerea) that prefer still air conditions. Ventilation also ensures a supply of fresh air for photosynthesis and plant respiration, and may enable important pollinators to access the greenhouse crop. Ventilation can be achieved via use of vents – often controlled automatically – and re-circulation fans.
Share
Previous Hydroponics
Next Fogponics