Kerala, regionally also Keralam, is a state located in the south-west region of India on the Malabar coast. It was formed on 1 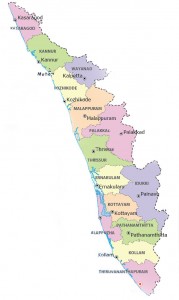 November 1956 per the States Re-organisation Act by combining various Malayalam-speaking regions. Spread over 38,863 km2(15,005 sq mi) with a population of 33,387,677, it is bordered by Karnataka to the north and north east, Tamil Nadu to the east and south, and theLaccadive Sea to the west. Thiruvananthapuram is the state capital among the 14 districts; other major cities include Kochi, Kozhikode, Kollam, Kottayam and Thrissur.

The region had been a prominent spice exporter from 3000 BCE to 3rd century. The Chera Dynasty was the first powerful kingdom based in Kerala, though it frequently struggled against attacks from the neighboring Cholas and Pandyas. During the Chera period Kerala remained an international spice trading center. Later, in the 15th century, the lucrative spice trade attracted Portuguese traders to Kerala, and eventually paved the way for the European colonization of the whole of India. After independence, Travancore and Cochin joined the Republic of India and Travancore-Cochin was given the status of a state. Later, the state was formed in 1956 by merging the Malabar district, Travancore-Cochin (excluding four southern taluks), and the taluk of Kasargod, South Kanara.

With a population of 33,388,000 in 2011, Kerala has the lowest population growth rate; 3.44% and a density of 819 people per km2. The state has the highest Human Development Index (HDI) in the country with 0.790 according to the Human Development Report 2011. It also has the highest literacy rate; 93.91%, the highest life expectancy; 74 years and the highest sex ratio; 1,083 women per 1000 men among the Indian states. Kerala has the lowest homicide rate among Indian states, for 2011 it was 1.1 per 100,000. A survey in 2005 by Transparency International ranked it as the least corrupt state in the country. Kerala has witnessed significant emigration of its people, especially to the Persian Gulf countries during the Kerala Gulf boom during the 70s and early 80s, and its economy depends significantly on remittances from a large Malayali expatriate community. Hinduism is practised by the half of the population, followed by Islam and Christianity. Malayalam is the major spoken language. It is considered as the “cleanest state in India”, however, the morbidity rate, at 118, is the highest in the country. Culture of the state traces its roots from 3rd century CE. It is a synthesis of Aryan and Dravidian cultures, developed over centuries under influences from other parts of India and abroad.

Production of pepper and natural rubber contribute to a prominent part of the total national output. In the agricultural sector, coconut, tea, coffee, cashew and spices are important. The state has 590 km of coastal belt, and around 1.1 million people of the state are dependent on the fishery industry which contribute to 3% income of the state. With 145,704 kilometres (90,536 mi) of roads, the state constitutes 4.2% of total India’s roadways. There are three existing and two proposed international airports. Waterways are also used as means of transportation. The state has the highest media exposure in India with newspapers publishing in nine different languages; mainly English and Malayalam. Kerala is an important tourist destination, with the backwaters, beaches, Ayurvedic tourism, and tropical greenery among its major attractions.